Packaging should be the same as what is found in a retail store, unless the item is handmade or was packaged by the manufacturer in non-retail packaging, such as an unprinted box or plastic bag. See details for additional description. What is painfully evident to anyone who has grown up playing over and over again all the previous Super Mario Bros. For us, the "new" is to stand for "new adventure.

Each world is made of a bunch of levels you can pick from the main map, ala Super Mario Bros. Each world has a mid-boss and final boss, Bowser Jr. There are Toad Houses you can unlock for a 1UP or powerup boost. All pretty standard Mario fair, right?

Play as Luigi, warp between worlds, and more secrets for DS

On the surface, yes. Nothing is more surface level than the graphics, and they are the first thing that will grab you. The bright, 3D-rendered graphics used are flat-out awesome. Everything is excellently animated, from Mario's arms flailing at different speeds depending on how fast he is running to wings flapping on a Koopa Troopa.

There are even some nice particle effects, such as the burning ashes falling in World 8. It is really a game you have to see in action to truly appreciate. To go along with the graphics, the sound effects and music enjoy the same excellent touch. 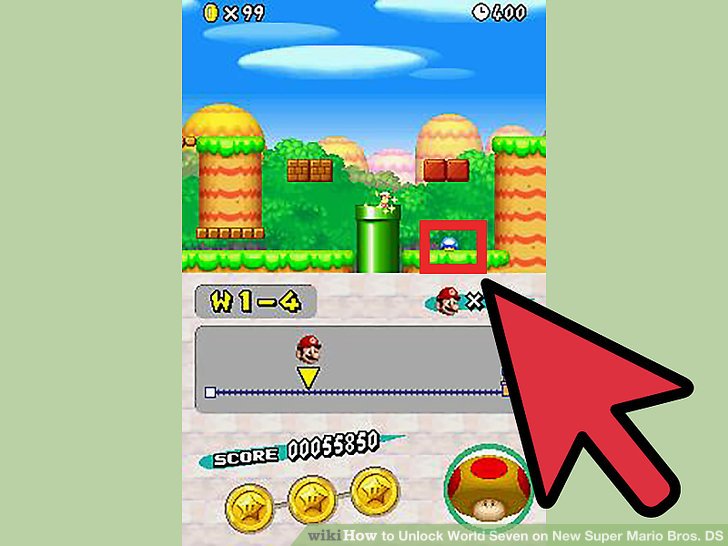 The music mixes in new renditions of classic Super Mario Bros. The sound effects follow the same formula, mixing in classic staples like bricking breaking and coins tinging along with some great new sounds like the death cry of the Piranha plants.


After the initial enjoyment of the presentation begins to wear off and the actual gameplay comes into your mind's view does the game begin to show its true nature of being a building block for the next, albeit younger, generation. None of the Super Mario Bros. The game sets you up so that you would have to work extremely hard to receive a "Game Over" screen. Not only are 1ups plentiful, no thanks to the 1up Toad Houses, but mushrooms and fireflowers seem to come every few screens. It's the feel good game of the summer because there is no real way to lose!

Despite its complete lack of challenge and disappointing new powerups , is a blast to play. But the biggest crime is that one weekend of play and most of the game is beat. There are very few extra or secret levels to unlock, and once those are finished, that's it for single player. Thankfully though, Nintendo tries to make up for this with 26 touch screen mini-games some new, some from Super Mario 64 DS and a fun Super Mario Bros.

If you are new to 2D Mario adventures or are more of a casual gamer, then this game is a wonderful addition to your gaming library and you can bump my overall grade up a point. For the old guard, it's great but just not "new. So, yeah. It's a Mario Bros. You don't really have to say more than that to get your point across. In it's first iteration for the DS, Nintendo has done a wonderful job creating something that is infinitely recognizable, but still different enough to warrant handing them your money anyways.

Graphics - I really like the style of this game. The colors are lush and beautiful and the character models are great. It is different from all the other Mario Bros. Gameplay - Really spot on. Once you get a hang of the physics of jumping and whatnot as you have to with any side scroller you will be tearing through the levels in no time. The only thing that bugs me with this is the new Turtle Shell power th at Mario can obtain.

Whenever you start sprinting, you turn into a shell and then bounce off anything that you run into when you are jumping. This makes it annoying to use at times, but not so much that you will put your fist through a wall or anything. Overall - The only problem with this game is that it is too easy. You can finish it in a day, and then it takes another day or two to run through and collect all the coins in every level.

Then all you are left with is the mini-games, which are the exact same ones available in Mario 64 DS. The game is loads of fun, and most definitely worth playing through several times, but don't expect it to challenge you too much. It's just meant for some good old fashioned fun. If you have a DS, this is one of the games that you purchased it for. Read full review. Reviewed for Big Boss Games by: T.

She needs self-defense classes To describe this game in one word WOW! Witty, thought provoking puzzles. Finish a level when the last two digits of the timer are the same number to unlock secret Toad Houses with a special bonus. Your finishing time will determine which type of bonus you get. After beating the game, a blue Toad House appears in World 1 where you can purchase new background patterns for the touchscreen.

There are five backgrounds, but the last one isn't available until you collect every Star Coin. To unlock a mode that prevents you from backtracking in some levels like the original Super Mario Bros. As is a tradition in Mario games, there are hidden warp points that allow you to travel between worlds. To access warp cannons, find the secret exits in these levels. Go to World Just before the end of the level, you'll see a koopa descending a staircase.

Jump on top of him as he walks off the third step from the bottom.


If timed right, Mario will continuously jump on the koopa's shell as it bounces back and forth against the wall. This will break the blocks, allowing you to get inside. Now enter the pipe. Instead jump to hit the last block before the pipe leading up. The block will reveal a P-Switch.